← more from
Glitterbeat Records
Get fresh music recommendations delivered to your inbox every Friday.
We've updated our Terms of Use. You can review the changes here.

War is a Wound, Peace is a Scar 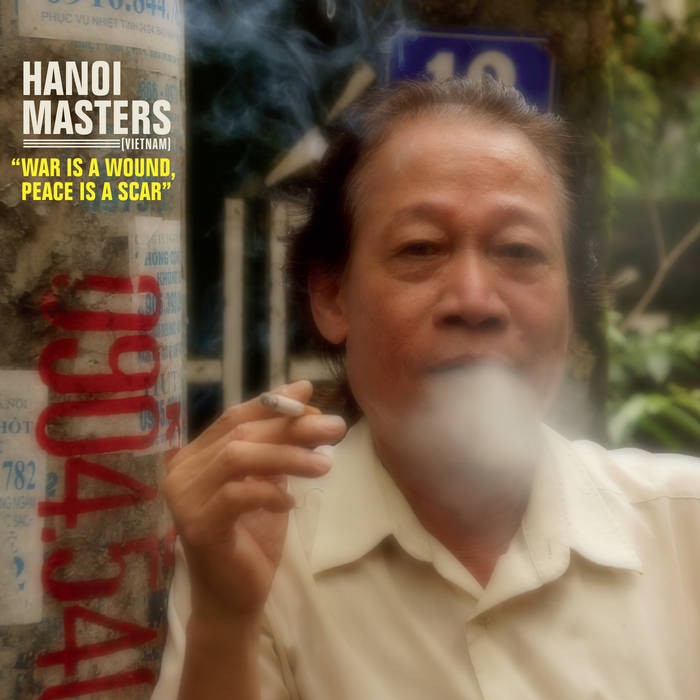 “Hanoi Masters: War is a Wound, Peace is a Scar” is a haunting audio document recorded in the summer of 2014 by Grammy-award winning producer Ian Brennan (Tinariwen, Malawi Mouse Boys, The Good Ones). The sepia-tinged songs are sung and played live and direct by elderly Vietnamese musicians using half-forgotten traditional instruments. These musicians all have deep personal connections to the upheavals of the Vietnam War and the album’s mesmerizing mood navigates the blurred line between raw beauty and sadness.

40 years after the end of the Vietnam War, a war these Hanoi musicians still call the “American War”, the wounds and scars of that era are ever-present. “Hanoi Masters” is an album of cautious healing and an unforgettable meditation on conflict, resistance, collective memory, and the longing for what has been lost.

In the liner notes of the album, producer Ian Brennan discusses the experience of making “Hanoi Masters”:

We had gone to Hanoi to record veterans from their side. Some were music masters, one of whom had joined the army at age thirteen and whose job it was to sing to the troops to boost morale and provide solace. Another was a former AK-47 issued village leader who had not sung in over forty years, and proved to be the most dead-on vocally. She did not hide or adorn, but quietly revealed muted emotions that a microphone often can detect more easily than face-to-face interaction. Then, immediately afterwards, she withdrew back into a stoic shell.

The streets of Hanoi are an almost direct inversion of western cities, with hordes of scooters displacing and grossly outnumbering cars. The chaotic ballet of riders, sometimes four or five to a single motorcycle, is offset by the reserve of the riders. Many are masked to ward off pollution and only once was there witnessed even the slightest reaction to all the incessant horns and traffic violations by others.

Those who dismiss Asian music as without an edge, may have simply overlooked the intricacy. With a whammy-bar technology that dates back to the 9th century, it is fair to say that Vietnamese traditions had a bit of a head start over the headbangers of the 1980’s.
A startling revelation was a plucked instrument (the K’ni) that is clasped between the teeth as the local dialectic language is spoken through the single string. What sounds like an extraterrestrial instrumental to the uninitiated actually contains coded, poetic lyrics. Again, futurist innovators like Theremin, clearly arrived a little later to the party than commonly claimed.

Let it suffice to say that these artists are a far cry from the lip-synching karaoke show that we saw on the local cable, with groups of teenagers cavorting on a soundstage and mouthing the words to K-pop songs---air-Karaoke, if you will---that managed to render something pre-fab even less real.

These elders carry a haunting, but muted sadness that seems only fully revealed through the music that they valiantly keep alive in the face of industrialization, waning regard and interest, and the rapid homogenization and “progress” overtaking their homeland.

Bandcamp Daily  your guide to the world of Bandcamp

Sampa The Great joins the show to discuss her release, "As Above, So Below".